The Hyperbolic Paraboloid and the Columbia River Crossing

As criticism of the proposed Columbia River Crossing continues to fester (there are those who despise the proposed bridge’s design and others question the need for a new bridge at all), a little talked about North Portland building faces an uncertain future. The Pier 99 building lies right in the path of the CRC project, should it eventually move into the construction phase.

The Pier 99 building was designed by architects John Storrs and Si Stanich, with structural engineer James G. Pierson, perhaps most notable for their work on Oregon’s 1959 Centennial Exposition. Originally called the Totem Pole Marina, the building is a rare Oregon example of  the “hyperbolic paraboloid” design. In fact, when it first opened, the Totem Pole Marina was reported to be the first commercial use of the hyperbolic paraboloid roof in Oregon. Just months earlier, Storrs, Stanich, and Pierson had worked together on the Forest Products Pavilion at the Centennial Expo, which included a similar roof design, but as with other Centennial buildings, it was only a temporary structure.

In 2008, the Oregon State Historic Preservation office determined that the Pier 99 building was eligible for the National Register of Historic Places. This determination came on the heels of a required Section 106 report noting the building’s significance. Such reports are generally required whenever federally funded projects pose a potential impact on historic resources.

Since there appears to be no feasible way to construct a new Columbia River Crossing with the Pier 99 in its current location, the next step is mitigation for the would-be historic structure. At this time, it is unknown what the final outcome will be, but moving the building to a nearby location seems one possible solution. It is also unfortunate that news of the building’s situation was not made more public – and sooner – especially since it has been more than three years since the Pier 99 was identified as being in the way of the CRC’s presumed “progress”. 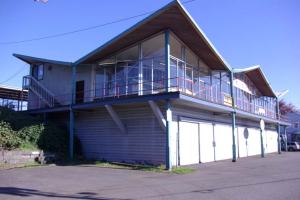 The public can apparently still comment on proposed mitigation measures for the Pier 99.

Filed under Historic Preservation, Modernism + The Recent Past