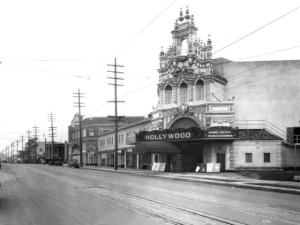 1926 Photo of the Hollywood Theatre - from National Register nomination. Note that the Arcade Building, that burned in 1997, was not yet constructed.

In March 1997, a massive 4-alarm fire destroyed the Hollywood Arcade building adjacent to the Hollywood Theatre on Sandy Boulevard. Since that time, the lot where the building once stood has remained vacant, but plans are now underway to construct a new mixed-use building on the site. The project raises an important question:

How do you design a building  adjacent to a historic landmark?

Initial plans seemed to completely abandon any sort of deference to the iconic theater, but are apparently being revised. In any case, the proposed five-story building could impact views of the amazing Hollywood facade. 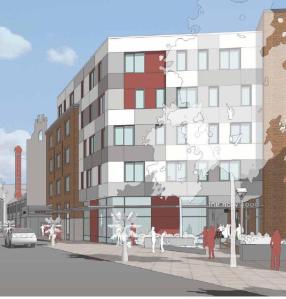 An initial rendering of the proposed new project. From a presentation recently delivered to the AIA Historic Resources Committee. 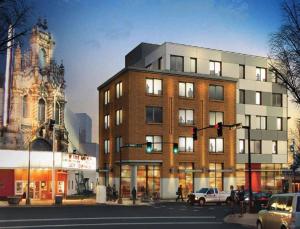 Another rendering of initial designs for new building proposed next to Hollywood Theatre.

It’s not that preservationists feel that whatever is built should mimic the architectural style of the theater. In fact, so-called “faux historicism” is just the sort of thing we don’t want. At the same time, building something completely in opposition to the surrounding neighborhood context (the theatre is the centerpiece) is also not a desirable outcome. There must be a balanced design that, to quote the city’s Hollywood and Sandy Plan (2000) respects “the character of the Hollywood Theatre” while also “emphasizing it as a neighborhood focal point.”

Policy 12.3 of the Hollywood and Sandy Plan focuses on historic preservation, specifically calling for the “preservation and enhancement of historic and architecturally significant buildings in the district.” The design guidelines for the area also “require development to respect and build off of the character of existing historic buildings by using similar siding materials and details such as cornices, windows, roof pitches, pilasters, and others.”

Completed in 1926, with a design completed by architects John V. Bennes and Harry Herzog, the Hollywood Theatre is the namesake of the neighborhood. The building was listed on the National Register of Historic Places in 1983 because of its architectural significance – including the fact that it is a rare Portland example of a building with polychrome glazed terra cotta. That fact alone makes enhancing the theatre’s façade even more significant. 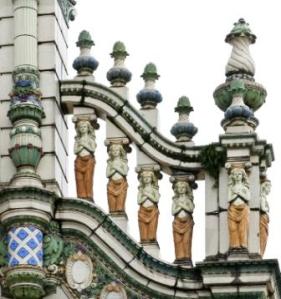 The project is still early in the design phase and hopefully, with enough citizen involvement, and with additional support from the city’s design review staff, the end result will be a much more context sensitive design.

Here is a link to a City announcement about the project – Although the meeting date has passed it includes some initial designs for the new building.

On May 19, The Oregonian published a story on the new project. Here’s a link to that story.

And at the meeting hosted by the Hollywood Boosters on 5/19,  the architects showed some slight modifications to the proposed building.  Here’s a link to the latest story – and a photo below showing very slight changes. 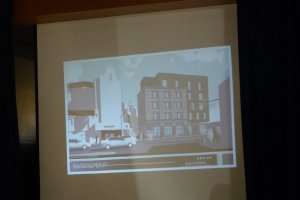 May 20, 2011 OregonLive.com photo showing the most recent design